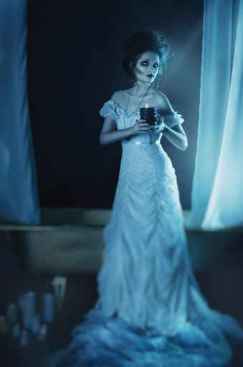 According to Wikipedia, La Sayona is a legend from Venezuela, represented by the vengeful spirit of a woman who shows up only to men who have love affairs outside their marriage.

Technically, perhaps it should have been filed under S but I’m using creative license once again, this time with the alphabet.

** Warning ** This story contains adult themes. If you are under 18 or sensitive to stories of this nature, please don’t continue. Thanks!

Craig replaced the phone in the receiver and glanced at his watch.

“Shit,” he mumbled under his breath. He’d been so busy, he completely forgot to pick up a gift for his wife, Lea’s birthday. He was trying to decide how he could make a quick stop and still make it to the bakery to pick up the cake when Jenny walked in and handed him a stack of files.

“You feeling okay?” she said.

Craig sat back in his chair and took in the sight of her. She was wearing his favorite skirt again, the one that almost showed a hint of the lacy garter he knew he’d find underneath it. He tugged at his tie and wondered if she was wearing the matching black panties.

“Oh, I almost forgot,” she said. She disappeared a moment and came back holding a small box wrapped in elegant silver paper with matching bow, “You’ll need this.”

He reached over the desk but instead of taking the gift, he grabbed her wrist and held it tight. He watched the look in her eyes darken and he wondered if he had enough time to lean her over his desk and do all the things he knew she liked. The scent of her perfume was making him heady with lust.

“I do what I can, Mr. Larson. You asked me to pick this up a week ago, remember?”

He’d completely forgotten, of course. When it came to Lea’s birthday, nothing stuck. When it came to the feel of Jenny’s smooth skin under his fingertips, however, he remembered every little detail. He inhaled deeply and closed his eyes.

“Craig,” he corrected. He hated it when she called him Mr. Larson.

“I hope she likes it.” Jenny tugged her arm free and smoothed her palms over her thighs. She looked a little shaken, like he’d had an effect on her and wanted to hide it. His fingertips itched with the need to tangle his hands in her hair as he kissed her breathless. He pushed up from his chair and crossed the short distance to reach her. She looked up at him with wide, brown eyes.

He didn’t give her the chance to finish. He needed the taste of her on his tongue, his hands filled with her shapely bottom. She didn’t resist as he nudged her back until her legs hit the desk. As she sat on the edge, he was already freeing buttons on his shirt with one hand and gliding his palm over her thigh with the other, determined to find out what lay out of his sight.

“Mr. Larson, your wife is expecting you…”

“She won’t mind if I’m a couple minutes late.”

“But it’s her birthday.”

He pushed her hair over to expose her neck as he kissed and nibbled his way from her ear to her shoulder. When it came to Jenny, he had a hunger that would never be sated. She made little sounds as he reached around and unclasped her bra, eager to taste her nipple. He was so drunk on her that at first, he couldn’t understand why her palms were pressing against his chest. Finally, he stepped back, acknowledging her desire to stop.

“That’s not what you said last time.”

“That weekend you took me on the business trip, you told me you were leaving your wife.”

“When, Craig? That was six months ago. We can’t keep screwing in the supply closet like animals. It isn’t right.”

“Well, I can’t leave her tonight,” he said feeling the irritation rise. Why were woman so damned demanding? “It’s her god damned birthday.”

Jenny had a look on her face like he’d slapped her but she pulled it together and started readjusting her clothes. So that was it then? He thought she would last a little longer than the last one before getting all needy on him. He’d given her a generous raise, enough that she’d gone and bought herself a brand new car. What more did she want?

He snatched the gift off his desk and his jacket from the back of his chair.

“There is nothing to talk about, Jenny. You made your feelings clear enough. I need to get home to my wife.”

He stopped. He could feel the weight of her stare on his back. How could she even be sure it was his? He had a pretty good idea he wasn’t the only man in her life. Typical bitch resorting to manipulation to get what she wanted.

He heard her gasp but he didn’t stand there long enough to listen to her cry. He hurried out to the elevator, punching the buttons until the doors finally opened, welcoming him into their serenity. He tried to calm his breathing as he hit the button for the lobby. He didn’t even notice he wasn’t alone until the sound of her voice caught him off guard.

He turned around to the most stunning woman he’d ever seen. She could have stepped right off the runway of a New York fashion show. His gaze traveled the length of her body, reveling at her low cut blouse and long, lean legs. He was pretty sure he’d never seen her in the building before and he’d worked here long enough to catalog all the women worth knowing.

“You could say that. I fired my secretary.”

“So hard to find good help these days,” she said with a smile. The sound of her voice and the look in her eyes drew him in. He found himself smiling at her despite his earlier agitation.

“I don’t suppose you’re in the market for a new job?” he teased.

“I could probably make a few cuts in the budget to accomodate your, um, high demands.”

She laughed and the sound of it filled his ears and made him hard. He hoped he wasn’t reading her wrong. She reached forward and hit the emergency stop button before the elevator had a chance to settle on the main floor.

“My employer makes certain I am well compensated for my special skills,” she said plucking the gift from his hand and holding it up, “You look like you have somewhere you need to be.”

“Nowhere special. It can wait.” He inhaled sharply as she stepped so close their noses nearly touched.

“Do you like to play?” she whispered in his ear.

His cell phone vibrated in his pocket. Much to his dismay, the woman reached to grab and answer it before he could stop her.

“What the hell?” he said, trying to get his phone back. It was probably Lea wondering when he’d be home from work. She was having her parents over for dinner and probably felt the need to remind him to pick up the cake because she knew he’d forget.

He heard Lea’s on the other hand asking who was speaking and wondering where was Craig?

“I’m so sorry,” the woman said, “but your husband has been in an accident.”

Whether she’d heard him or not, he wasn’t sure. The stranger disconnected the call, never taking her eyes off Craig.

“What the hell is wrong with you? That was my wife.” He snatched the phone and the gift and hit the elevator buttons, trying to make it start moving again. The elevator wouldn’t budge.

“She will miss you. As will your pregnant mistress. Those two will have a lot to talk about at your funeral.”

The woman smiled before nudging him aside to activate the elevator again. At her touch, it came to life instantly except, instead of going down, it started moving up.

“I’m getting the hell out of this elevator,” Craig said poised at the door to leap at the first chance.

The elevator came to an abrupt stop and Craig readied himself to exit. He couldn’t stand another moment being next to her. But instead of the doors opening, the elevator began freefalling. He grabbed the side.

She smiled and gave him a little wave as he looked at her in terror, unable to form the words to speak.

Just before the elevator crashed, she vanished.

Thank you for reading and please feel free to share your thoughts. Each day I am posting a ‘snippet’ based on a paranormal creature that begins with the corresponding letter of the alphabet. I am using this as a fun writing exercise which I am hoping will also be enjoyable to read, but keep in mind that due to the fact that I must post a new snippet each day in April except Sundays, the posts may be a bit rough. I’ll do my best, however, in the limited time I have available to me. 🙂 Let me know your favorites or the posts you find most intriguing because I plan to develop those into a full story later in the year!

Check out the other participants in the A to Z Challenge.

21 thoughts on “#AtoZChallenge Visitors from Beyond – Lured by La Sayona”