Over the weekend, we took the kids on a local train ride. It wasn’t quite Thomas the Tank Engine and I admit, it wasn’t even a steam engine, but the kids loved it just the same and so did I.

This is one of the minions and me posed by the diesel engine before we boarded the train.

One of my earliest and fondest memories is from when I was just a little younger than this guy. My parents lived in a trailer park until I was five when they bought the house that I would eventually grow up in. I don’t have a lot of memories of the trailer park where we lived in those early years but I do remember there were train tracks at the bottom of a large hill and my dad used to take me to watch the trains go by. I loved it. I had a fascination with trains from an early age and to some degree, I still do.

This particular train ride only lasted an hour, which is probably about the perfect amount of time with three young children. We traveled along the Kiski River. Here is a peek of the river through the trees. 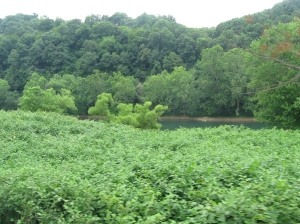 …and again, along with all the lush vegetation that I love about Pennsylvania summers.

There is a nice camping area along the river, at least if you’re into big campers and such. (Personally, I’m more of a tent in the woods kind of girl, but that’s just me…) There is a sense of community amongst these campers.

I could see a story taking place here. Could you?

My personal favorite part of the train ride was the view over a tall bridge where we stopped to enjoy the view and take pictures. I took quite a few photos from here but since I can’t possibly share them all, I singled out this one and I hope you like it as much as I do.

Thanks for joining me on our little train ride adventure. I look forward to sharing more in the near future (including photos from an upcoming camping trip!) so stay tuned…